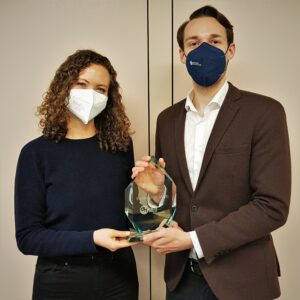 Carola’s thesis project investigates sex and gender differences in prevalence and outcomes of comorbidities of diabetes mellitus and is part of a multidisciplinary project between the Gender Medicine Unit (GMU) and the Section of Science of Complex Systems (SSCS). The project aims to combine expert knowledge on gender medicine and statistics to investigate gender medicine aspects in a database of hospital diagnoses (45.000.000 diagnoses) of the whole Austrian population from 2003 to 2014.

Currently, in the field of diabetes mellitus, there is little knowledge about the influence of sex and gender on diagnosis, development of complications, comorbidities, treatments and, ultimately, hard outcomes such as life expectancy. It is hypothesized that women might be more vulnerable to certain comorbidities of diabetes mellitus and be more prone to less favorable outcomes. So far, Carola and her colleagues have investigated potential sex differences in the risk to develop depression, Parkinson’s disease and cardiovascular diseases. Other research interests include a transgender study investigating the short and long-term effects of hormone replacement therapy and biomarker research in gestational diabetes mellitus with the aim to better understand the pathophysiology and risk factors and potentially predict the development of gestational diabetes mellitus.

Carola’s research efforts already led to numerous publications in peer-reviewed scientific journals, amongst these first-author publications in „JMIR Cardio“, „Scientific Reports“, „Journal of Clinical Medicine“, „Annals of Nutrition and Metabolism“, „BMJ Open Diabetes Research & Care „and in the top-ranked „Journal of Parkinson’s Disease“ where it could be shown that women with diabetes mellitus have a higher relative risk to develop Parkinson’s disease in comparison to male diabetics.